You probably know that I’m a Calvinist (if you weren’t aware of that you don’t stalk me enough!). I hope I don’t get lots of unfollowers, now that you guys know (it’s biblical okay!!). Anyway, that’s not what this post is about. The thing that people are always shocked to hear is that I had never met a Calvinist in real life. Yeah, that’s right. All my reformed friends lived in the United States (why do all the cool people live there?!), and I only knew them from Twitter (best thing there is on the Internet, besides funny cats videos if you ask me). So here I was, all by myself, surrounded by people who either had never heard of Calvinism or absolutely hated it, until something wonderful happened. This is a story of God’s amazing providence and how my life changed for the better.

It was a Tuesday afternoon, that I decided to drag my sister along (I agreed to buy her dinner, we both love food..) to a Christian bookstore. When I actually think back to that day it’s amazing that I actually made it to the correct one. You see me being extra smart somehow found a Catholic book store and was greeted with stares when I asked for books about the Reformation (I think I’m probably on their banned list now, haha).

So we ended up walking from Westminster to St.Paul’s which is quite a bit of a walk. Around an hour later (spent wisely in the bookstore), with four very heavy bags of books and in desperate need of caffeine I headed to the closest coffee shop. And there she was. You know one of those annoying people that fund-raise and asks you to donate money to some weird cause you’ve never heard of, like saving Tigers (I’m not anti-tiger or anything!!). I usually avoid eye contact and mumble a ‘Sorry I’m running late’ excuse that no one believes and am relieved when they turn their attention to another passer-by.

Me and Esther (my sister) made sure we dodged her as much as possible and we nearly passed her when she said ‘I was looking at you guys before.’ I don’t know why, but I just stopped. However, I immediately regretted my decision and was saying goodbye to my money which would be certainly given away for whatever cause this girl was working for (I can’t say no, to save my life!). Since I stopped the girl got more smiley-er (I know that’s not a real word, deal with it.) and  the first thing she asked was ‘What shopping did you do, what’s in the bags?’. I replied ‘oh just books..’ Now came the dreaded question, ‘Books? Nice, what kind of books?’ then she decided to open one of the bags I was carrying to have a look. The thing is, I am happy telling people I am a Christian, I read books by dead people, however I feel like I might come across as creepy saying this to strangers. So though thinking ‘Ugh, why can’t she just take my money instead of being so nosey’ (I promise I’m not mean..) I said ‘Oh Christian books.’

Instead of the expected long awkward silence she said ‘I’m a Christian too!’ now don’t get me wrong I was very delighted but in my head I was thinking ‘too bad you aren’t a Calvinist’. Of course being a Calvinist doesn’t make you a better or a worse Christian but to me meeting a Calvinist was like encountering a unicorn (basically impossible). Then she said I read Piper. Now if you know me, I’m obsessed (to put it mildly) with Piper. We chatted about Piper and Ligonier and she ended up giving me her number so we could text. I went home really happy and I even tweeted about her: 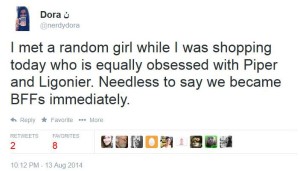 So I texted her that day and she replied. But me being terrible at replying to texts, I totally forgot to reply back. Now at this point I didn’t know that she was reformed or that she went to a reformed church. So about two weeks later, me using Twitter as a platform to moan mostly I tweeted something about Calvinism and Westboro Baptist and guess who saw that tweet?! That’s right the lovely girl, whose name by the way is Aba. So it turns out we had been following each other on Twitter before our paths ever crossed- how brilliantly weird is that?!

So we chatted for a couple of days and I was so amazed that she was reformed! She mentioned that she went to a Biblestudy on Friday nights and invited me (I was really hoping she would haha!).

And that’s where I met more reformed people. At this point I just would like to say that Calvinists in real life are not like some of the weird ones I had come across on Twitter (no offense haha). They are the most welcoming friendliest bunch of Christians I have come across in my entire life- no exaggeration.

So this is the story of how I met my first reformed friend and found a brilliant community.

2 thoughts on “How I met a Calvinist.”